On Friday the Bureau of Labor Statistics reported 263,000 new jobs were added in September. While that growth seems like good news in this economy, it runs directly counter to what the Federal Reserve wants to see. And the even worse news for the Fed was that the unemployment rate fell back to 3.5%.

That low unemployment rate has to be driving the Fed nuts. Americans working and spending money is something they don’t want to see as they have forecasted a recession next year and are looking for the unemployment rate to reach 4.4%. This is a dark day for the Federal Reserve and its members, as their goal to put Americans out of work hasn’t worked out yet.

From the BLS: “Total nonfarm payroll employment increased by 263,000 in September, and the unemployment rate edged down to 3.5 percent…Notable job gains occurred in leisure and hospitality and in health care.” 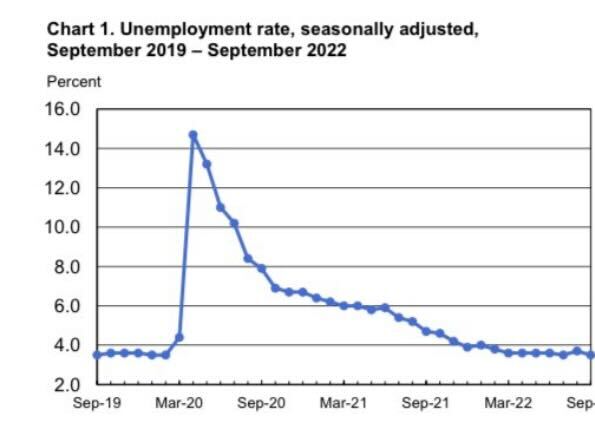 Here are the areas where the report says jobs were created and lost. The government sector has had difficulty hiring people; some didn’t bother to go back to work for them. Transportation and warehousing jobs falling isn’t a surprise since many companies have hired too many people in that sector.

We have to remember this about jobs, that even though we got all the jobs back lost to COVID-19, we are not back to the total levels we should be if COVID-19 never happened. So, think of it as playing catch up, as some of the consumption data is still positive for now.

Below is a breakdown of the unemployment rate and educational attainment for those 25 years and older. We have seen significant declines in the unemployment of Americans with the least amount of education in this report from August. Those with less than a high school diploma went from 6.2% to 5.6%, and those with just a high school education and no college went from 4.2% to 3.7% 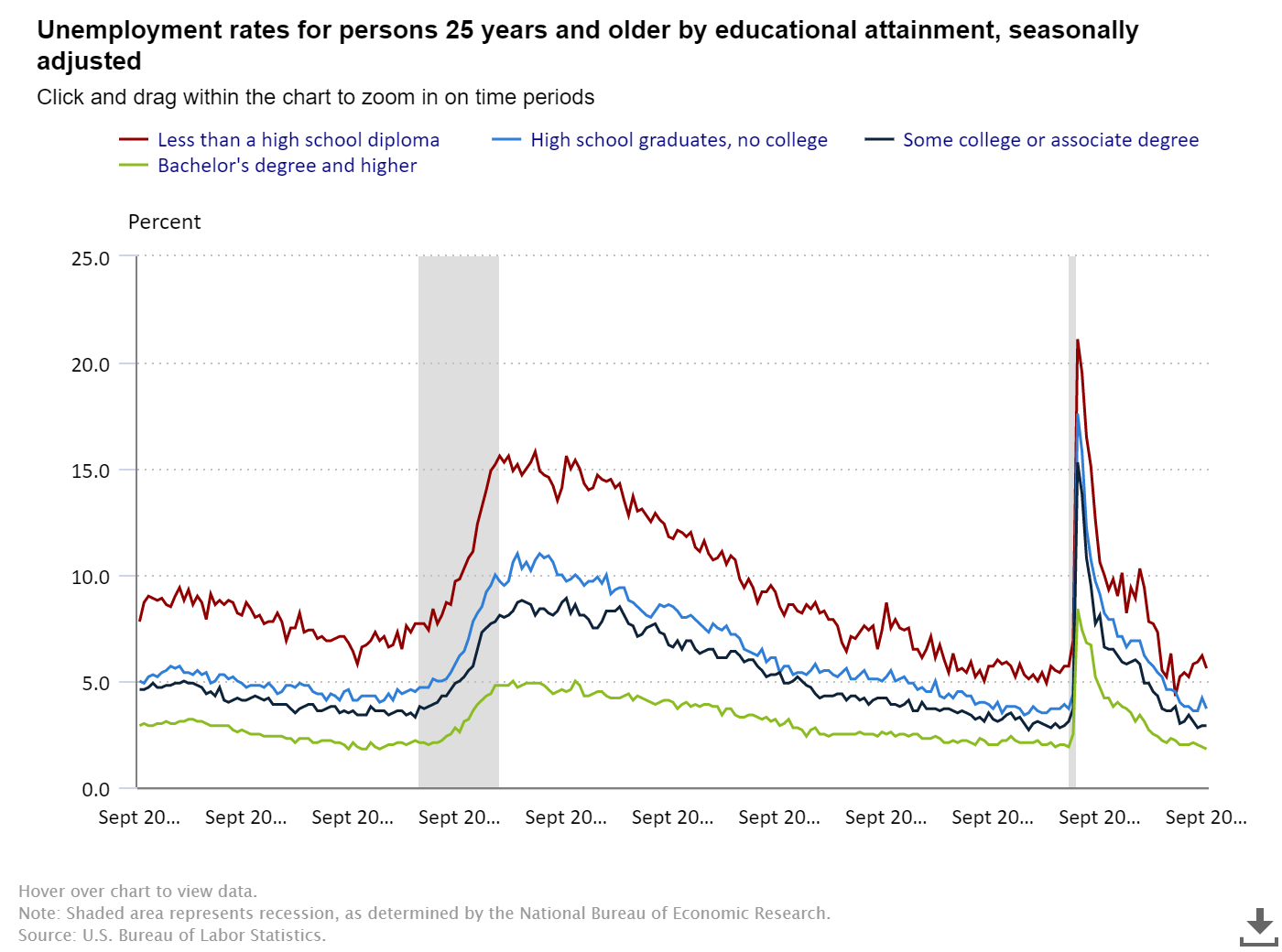 The labor market is still creating jobs, which is not what the Fed wants. Since all six of my recession flags are up, the only two data lines that I am focused on now with the economic expansion going into recession are the job openings data and the jobless claims data.

For those that have followed my America is Back recovery model and going into the expansion, you know that I was a big believer that job openings would get to 10 million. Unlike many people obsessed with the labor force participation rate, which I have deemed useless in the economic expansion and recession cycles, I am a fan of employment-to-population ratio data of the prime-age labor force ages 25-54. That is the bread and butter of the labor market, and it has made a good comeback in this recovery.

However, most Americans are always working, and as population growth slows and the Baby Boomers age out of the workforce, we need more labor in certain parts of the U.S. that lack prime-age labor force growth.

Job openings reached nearly 12 million in this recovery and have fallen to 10 million. This is a noticeable rate of change decline. Remember, the Federal Reserve wants wage growth to cool off, and some of that has been happening. However, the Fed prefers a job-loss recession to free up more labor.

Wage growth is a big issue for them as they see the employment cost index as a transmission to price inflation. Job openings falling recently is something the Fed is cheering for.

The unemployment rate is still historically low; we are not close to a significant job-loss recession. On the jobless claims data, I am targeting the 323,000 level in this data as the inflection point where the Fed will pivot from its hardline talking point. When I say 323,000, I mean the four-week moving average. Also, a note: usually, this data line takes a big hit due to any hurricane, so be mindful of this with the data coming up in the next few weeks.

See here for a chart from the Department of Labor on seasonally adjusted dataf or unemployment insurance.

When the labor market breaks, claims tend to shoot up fast, and the job-loss recession will have started. That will be the final nail in the coffin of this expansion which has created 22.5 million jobs since April 7, 2020, the day I wrote the America is Back recovery model, and when it was retired on Dec. 9, 2020.

The Federal Reserve is using the labor market as cover for its aggressive rate hike language. I still believe their aggressive talk is trying to buy time for the inflation data to turn down so they can eventually pivot. So far, the jobs data gives them the cover to do this. If jobless claims rise above 323,000, I believe the entire discussion of the Federal Reserve and its members will shift dramatically. However, we aren’t there yet. So, I would take some of their more aggressive stance with a grain of salt for now.

The Leading Economic Index is now in full-blown recession mode on a historical level. I recently presented my six recession red flag model to the Conference Board, and everything looks right to me. At the core of my progressive six-recession-flag model is this: that we maintain a recession watch but we’re not in a recession until the labor market turns. 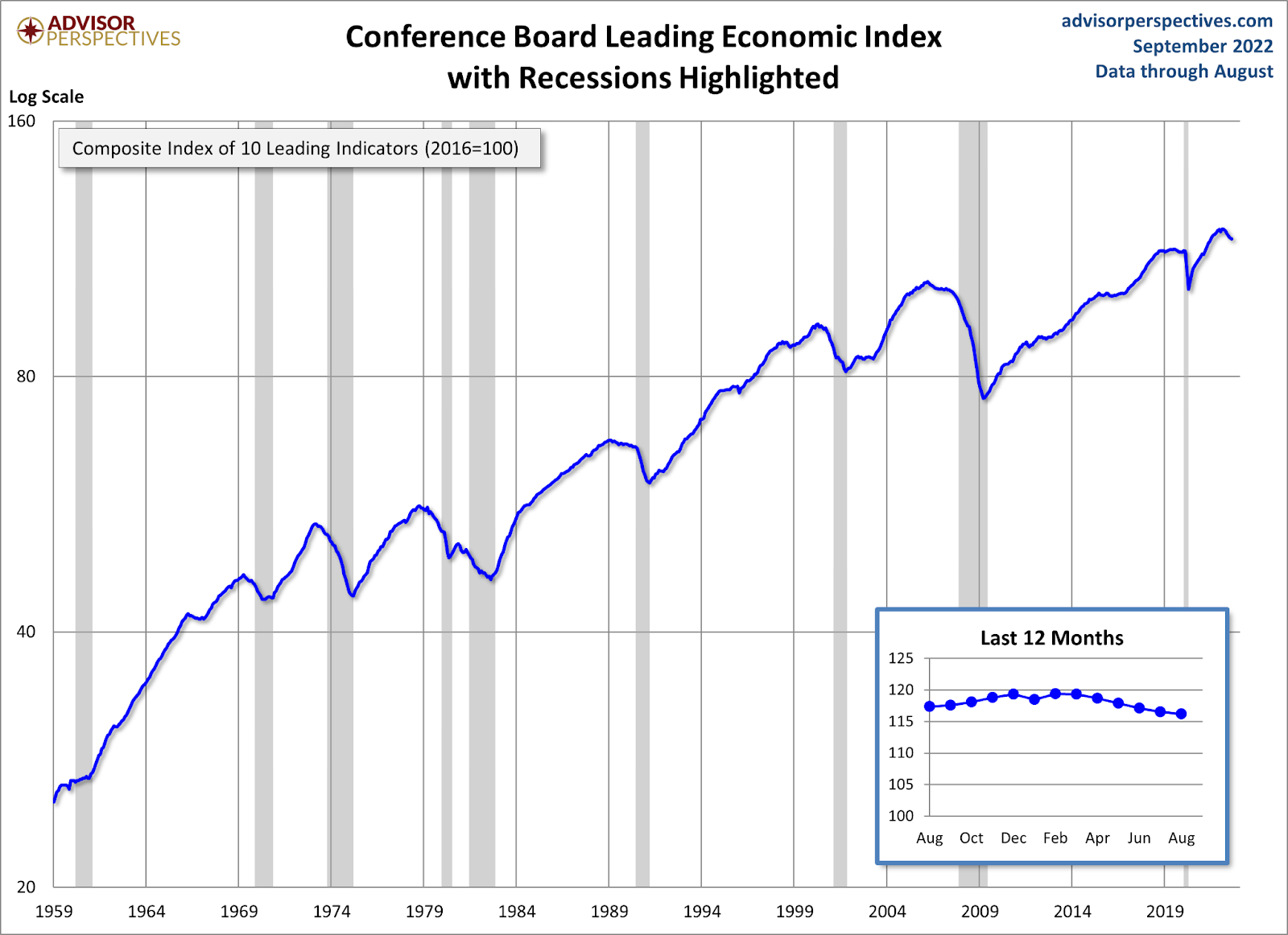 At this point, is there any way to prevent a recession? Once all six recession red flags are up, history is not on our side.  However, due to the crazy swings that this COVID-19 recovery has given us with the wild bullwhip effect on data, I have come up with some plausible theories. Here are the two ways we can avoid this recession:

1. Rates fall to get the housing sector back in line.  Mortgage rates falling below 5% would be a plus for housing. This can happen with a weaker economy and a better mortgage-backed securities market as well.

2. The growth rate of inflation falls, and the Fed stops hiking rates and reverses course, as it did in 2018. Some of the inflation data is cooling off a bit already and will find its way into the data lines. However, rent inflation won’t be coming down in the data until 2023 even though we see some coolness in that sector already.

Can either of these scenarios happen? If we don’t have any more supply shocks like that of the Russian invasion of Ukraine, or from other variables that aren’t tied to the economy, the growth rate of inflation should be falling next year, due to rent inflation falling. I talked about it on CNBC recently. If that happens, if the Fed starts to pivot and then cuts rates as they did in 2018, we might have a shot here.

However, history has never been on our side once the six recession red flags are up. There is a first time for everything, but for now, most people are employed, and the fear is that the Fed is coming for your jobs. We will need to be more focused on the core data lines that matter to this economic expansion.

The post Why a good jobs report is bad news for the Fed appeared first on HousingWire.